The amber libation which has successfully been brewed for more than 6 000 years competes with spirits and wine for share of throat. How much do we really know about beer?

It’s quite simple really – just four ingredients are required: water, hops, malted barley and yeast.The whisky industry has done a really good job educating whisky enthusiasts about the importance of water in the final product. Whether it’s drawn from a spring in limestone soils in Kentucky, peat-rich dirt on Islay or a crystal-clear mountain stream, water quality is non-negotiable.As beer writer and international judge Lucy Corne wrote in issue 19 of CHEERS, hops is the sexy ingredient. “Hops season the brew, adding bitterness, flavour and aroma. Hops bring a wide range of aromas to the glass: grapefruit and granadilla; pine needles and black pepper; mango and melon and lemon and orange. Grown in the USA, northern Europe, Australia, New Zealand and right here in South Africa, hops can be likened to grape varieties. They need a certain type of terroir to thrive and their characteristics depend on where they have been grown. And like grape varieties, hops come with memorable monikers like Colombus, Citra, Saaz and Fuggles.”
If hops is the x-factor then malted barley is the frame on which the brew is built. As Corne wrote, it’s malt that gives beer its colour while also adding a set of flavours. Notes of toast, bread or biscuit, toffee, coffee, caramel or chocolate to be found on your favourite brew? That would be the malt.It’s most important contribution though, is that of providing the necessary sugar that is turned into alcohol during fermentation. And for fermentation to occur, yeast is required. “Yeast’s most important job is converting sugars into alcohol but it also brings its own set of flavours to the party, most famously in Belgian beers and German Weissbiers, with their characteristic aromas of bubble-gum, banana and spice,” Corne wrote.That’s the essential process and ingredients required for brewing beer – but matters are complicated even more when consumers realise there are in the region of 120 recognised styles!

Here’s an alphabetical “need-to-know” glossary of all things beer:

A is for Ale, the historic brew made initially only from barley, water and yeast. Hops only became part of the recipe centuries later. Ales are top-fermented beers and typically brewed at warmer temperatures.

B is for Barley and Bitters. Barley is the cereal grain used as the base for beer – and other distilled spirits such as whisky, for example. Bitters don’t describe the aromatic liquid used to colour and flavour gaudy cocktails but describes the sharpness of flavour imparted to a beer by hops. (Hops is added during the boiling stage of brewing and the longer it’s part of the process, the more bitter the final brew will be.)B is also for Bottom Fermentation – the opposite of top fermentation. In this process, yeast cells sink to the base of the fermentation tank rather than floating on the top. Hence the difference between top and bottom …C is for Carbonation, the light sparkle from carbon dioxide in the brew which not only helps to give beer its distinctive foamy head but also the drinker a surfeit of gas, with resulting gastric discomfort often relieved by means of a burp or belch!

D is for Draught – a beer poured into a glass directly from the keg by means of a tap. So never bottled or otherwise packaged, it’s often considered fresher and more tasty as a result.

E is for Esters, the technical sounding term for things which impart smells to beer, often described as fruity or flowery aromas.

F is for Fermentation – the process by which the sugars in the cereal grain are converted into alcohol and carbon dioxide by the action of yeast inoculation.

G is for Grist – which is when the grains of malted barley are ground finely to get them ready for the brewing process of mashing.

H is for Hops: Hops is a small cone-like flower which grows on a vine – and only the female plant yields these flowers which deliver beer’s distinctive bitter aroma and flavour. There are a host of different types of hops grown globally, with the Saaz hop being just one of them.

I is for India Pale Ale or IPA – a style of pale ale developed specifically for the East India Company which wanted a strongly hopped brew which could withstand the sea voyage to India in the mid-1800’s. 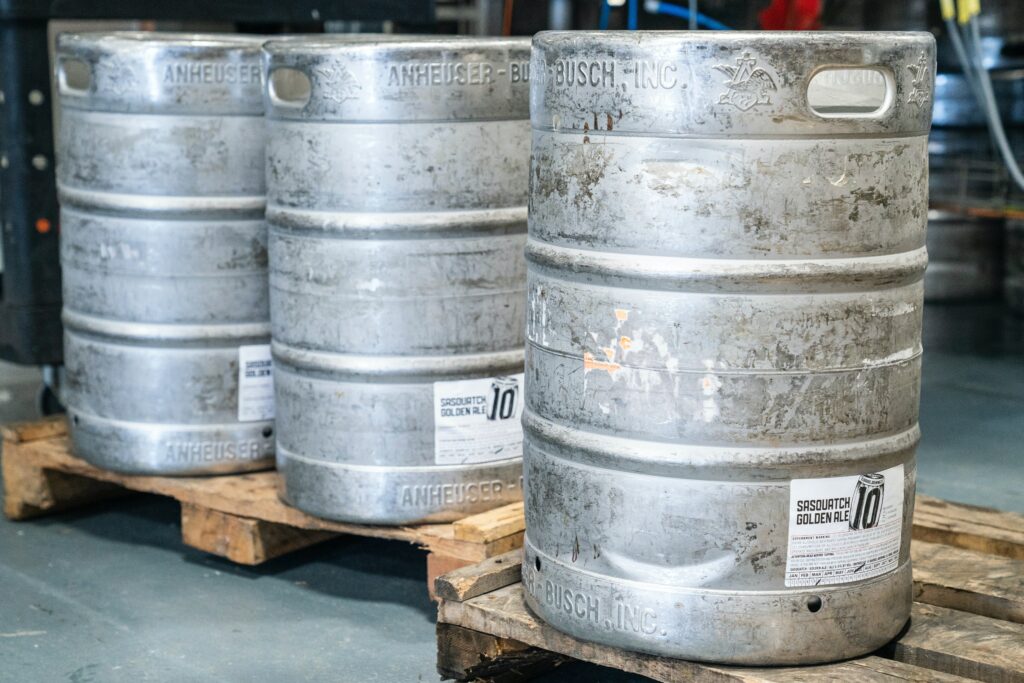 K is for Keg, the cylindrical vessel used for the storage and transport of beer. Historically kegs were wooden but nowadays are manufactured from aluminium or steel for their ability to withstand the pressure of the carbon dioxide filled beverage. A keg generally contains 30 gallons or around 120 litres of beer.

L is for Lager, any type of beer fermented with a bottom fermenting yeast at colder temperatures. Lagering was developed by a German brewer. Prior to this it used to only be possible to brew beer seasonally – and this cooler process, assisted by the development of refrigeration in the mid-1800’s allowed for year-round brewing while also producing a clearer, crisper and cleaner beer.

M is for Munich, home to the world’s largest beer festival – the Oktoberfest. It also stands for Malt, the processed barley which has been saturated in water and begun the process of germination before being dried so that its starches can be fermented.

N is for Ninkasi, the ancient Sumatran goddess of beer, worshipped through the ages but somehow forgotten in modern times. 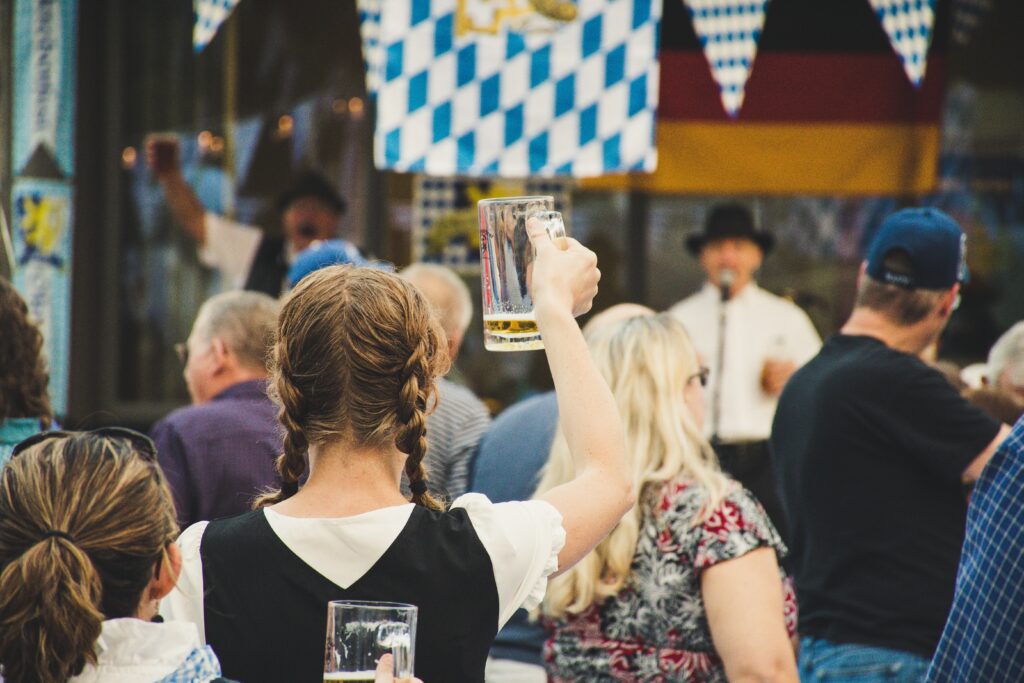 O is for Oktoberfest, held in Munich, Bavaria, for two weeks in late September and into October. It’s been held annually since 1810 and is a celebration of Bavarian culture involving beer, food, music and gemütlichkeit, originally started to mark the wedding of Crown Prince Ludwig to the Saxe-Coburg Princess Therese.

P is for Pilsener – the very hoppy, pale, golden brew first fermented in the Czechoslovakian town of Plzen in 1842. It is a bottom-fermented beer which usually has an alcohol by volume of around 5%. One of the most international examples is Pilsner Urquell, a product which was patented as far back as 1898.

P is also for Pale Ale – a brew initially made from pale malt, a less smoky, roasted barley which naturally imparted a lighter colour and less hoppy flavour. And let’s not forget Porter – the dark, hoppy, slightly bitter, top-fermented beer which was brewed for porters, labourers and carters by Ralph Harwood in London’s Shoreditch area in 1730. It was believed that this “stronger” beer would provide the strength needed by these men in their manual labours. The dark colour came from the use of roasted, unmalted barley. It eventually fell out of favour with straight bitter taking over.

P is also for Pint, one-eighth of a gallon – or in metric terms 567ml.

Q is for Quality – see Rheinheitsgebot below.

S is for Stout, a dark brown, almost black brew which commonly boasts a thick, creamy head. The colour and flavour is derived from the roasted barley which is almost charred before being fermented. It imparts a rich chocolate or coffee flavour to the resulting beverage.

T is for Trappist beer, brewed in only 11 Trappist monasteries worldwide, six in Belgium, two in the Netherlands and one each in Italy, Austria and the United States. It’s subject to certain laws and consequently has to be brewed within the walls of a Trappist monastery, the beer quality should be non-negotiable and excellent, the brewery should be of secondary importance only to the monastery and it should be a non-profit venture.

T is also for Top Fermentation, a method favoured in the making of ales in which the yeast cells rise to the surface of the tank during alcoholic fermentation.

U is for aUniversally brewed and accepted drink. Any arguments? 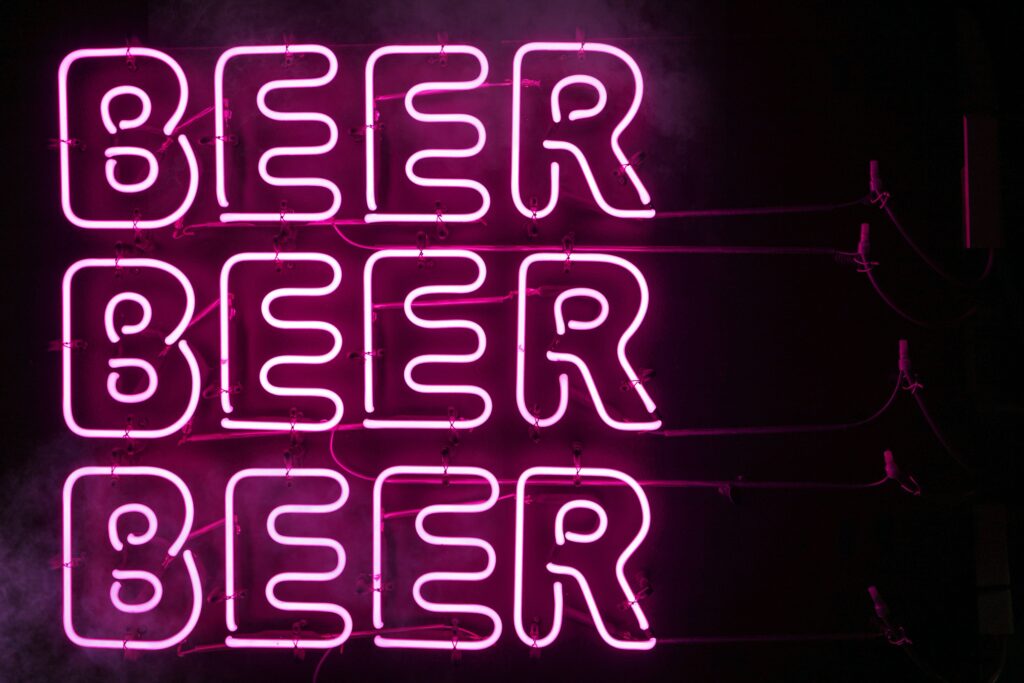 V is for Volume – specifically alcohol by volume which varies according to different styles of beer, from light at 1 or 2% to heavy such as the Trappist brews which weigh in with anything from 5% to 7, 8, 9 and even 10% alcohol by volume.

W is for Weiss beer or Witbier – which can mean beer made from wheat or the Belgian term for white beer, also brewed from wheat. This type of beer can be cloudy or crystal clear when filtered, and the taste is fresh and smooth, sometimes spicy, with a noticeable lack of hop bitterness.

X is for aOne of Australia’s favourite brews and which used to proudly have its name emblazoned on the Wallaby rugby jersey – XXXX Lager. But then again, Mexico’s Dos Equis also has that (double?) X factor …

Y is for Yeast – one of most necessary ingredients in the brewing process. Yeast kick-starts the fermentation process and feeds on the fermentable sugars, converting them into alcohol.

Z is for Zeitgeist, or the spirit of the times. Beer is no different to any other product in which fashions come and go. Sometimes its craft, lite, IPA or even a beer with a particular geographic focus or a special kind of hops. Point is, there’s something for every taste and mood. Z is also for Zamalek, a nickname for Carling Black Label. South Africans have so named the brew because its label sports the same red and black colours as those of top Egyptian football team, Zamalek that thrashed Kazier Chiefs in the 90’s.