Remember when your parents told you all those years ago, it was not about winning or losing, but just taking part? It’s still the case Gareth George maintains.

Among anglers, fly fishing is not a competitive sport. After all, it’s the fish you have to battle, so another fly fisher can only really be considered company on the water.

Hence, the TOPS at SPAR Corporate Challenge has never been about fishing, despite some 24 000 trout having been caught and released over the last 20 years. This benchmark fly fishing festival is all about the time spent with mates, imbibing and embellishing on past shared angling adventures and possibly trying to convince anyone within earshot that you can throw a line.

Despite the pandemic’s efforts to keep us all locked up at home under adjusted levels, causing mayhem with our best laid plans, this gathering of like-minded souls was yet again successfully hosted at the legendary Notties hotel in the KwaZulu-Natal midlands. While the pub was a shadow of its former self with sensible social distancing enforced, that didn’t stop every entrant from celebrating in the great outdoors, winter weather or not.

The WildFly waters lived up to its reputation, producing some spectacular rainbows and even a few rare browns. The conditions however, could not have been more challenging and really tested the mettle of the contestants. Howling winds, driving rain and even icy sleet that turned into a genuine snowstorm – but mercifully everyone was protected by branded Jonsson fleece garments.

Under these circumstances, no rational person would choose to take out a fly rod – but one symptom of the pandemic is the loss of perspective … and logic was quickly cast aside. Every single person braved the merciless weather and returned, beaming like schoolboys who’d finally been allowed out to play. Blue lips and wind-scorched complexions were badges of honour.

Scotch whisky truly is the “water of life” and Glenbrynth single malt kept polar bears at bay. The trout played their part too, with 699 fish making into the record books in the qualifying legs. Thankfully the final brought out a little sun and with spring brightening the landscape, the 48 fly fishing contestants made a lot of hay.

The tally of 112 fish in the first session was followed by 75 in the second, with a 64cm rainbow hen from Oakbrook dam landed by Paul Lishman, equalling the 64cm brown caught in leg one. Remarkably 79 trout were landed in the third session and as one has come to expect only 48 in that last shell shocked session with Gavin Loveday recording another 64cm from Spring Grove Dam.

This was the first count out, forcing organisers to look at their respective largest fish in the legs, Lishman’s 59cm from Oribi dam, pipped Loveday’s 56cm, bestowing on him the trophy for the largest fish of the 2020 TOPS at SPAR corporate challenge.

The 314 trout caught in the final took the tally to 1 013 for the event. But yet again it was the average size of fish recorded this year that caught everyone’s attention with every dam measuring a trout in excess of 55cm and more fish caught over 50cm than any other year!

The session scoring system kept the adjudicators busy and everyone guessing with two count outs, for fourth and third place as well as for silver and gold, with just a single fish tipping the scales. 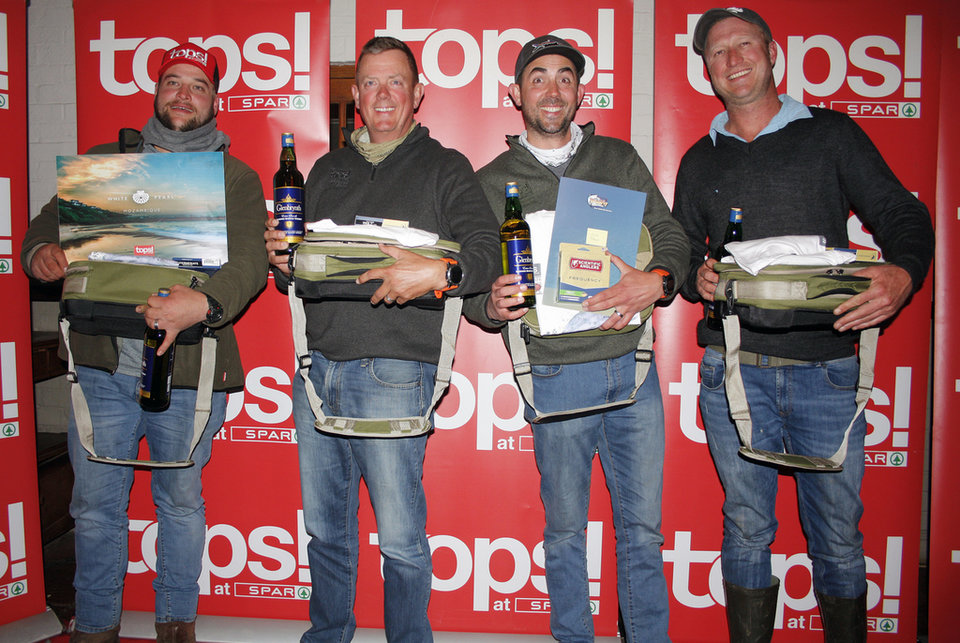 Every fly fisher won a holiday to indulge in some more fishing compliments of WildFlytravel.com, and Easy Escapes, but there were some anxious anglers waiting to see if they’d made it to the trophy tiger grounds of Matoya Lodge, the majestic Bains River Camp in the lower Zambezi or the luxurious White Pearl Resort in Mozambique as well as the incredible Orange River drift with Kalahari Outventures.

Hendrik Fourie took top honours at the TOPS at SPAR challenge with his 17 trout caught and released, engraving his name into the WildFly honours board at Notties.

And this performance was good enough to catapult his team ST Fergusson, past the third place of “Nymphmaniacs” and the second place podium held by team “ZZ Tops” to be crowned the 2021 TOPS at SPAR Corporate Challenge champions.

With trips to Semonkong in Lesotho, Shayamoya on Jozini, Giants Cup in the Drakensberg or Fordoun and Invermooi in the Midlands, every team was rewarded for their efforts on the water.

This coupled with the incredible prizes from Hardy, Greys, Airflo, Frontier Fly Fishing, Outdoor Warehouse and Xplorer ensured that regardless of who caught what, just for harassing the trout you walked away with an armful of goodies.

So when all was said and done, there were a lot of winners in the war waged against the trout in WildFly country!