Pie. Pastry crust and filling. Simple – but potentially sophisticated and always delicious, whether savoury or sweet. Capsicum Culinary Studio’s trainees suggest a number of ways to slice them!

Pie charts are an easy way of understanding market segments, pie in the sky means it ain’t ever going to happen … and don’t forget about having a finger in a lot of pies! Then there’s pie eyed, a real cutie pie and eating humble pie. And let’s not overlook Don McLean singing about driving his Chevy to the levee to say goodbye, Miss American Pie!

Pies seem to creep into many an idiom but this baked item even has its own national day in America. (To any interested parties, January 23 would be the date to circle on the calendar.)

But pies as we know them today are a fairly recent addition to a history that goes back as long as mankind has had dough to bake into a crust and various ingredients to stuff inside. Historians trace the pie’s initial origins to the Greeks, who are thought to be the originators of the pastry shell made by combining water and flour. The wealthy Romans used many different kinds of meats, even mussels and other types of seafood, in their pies, while in medieval England, they were most often filled with beef, lamb, wild duck or pigeon and spiced with pepper, currants or dates.

Pies have always been a popular form of food because their crusty tops can act as a means to preserve food and were often used by travellers, explorers and adventurers who used dried fruit, cinnamon, pepper and nutmeg to season the meaty fillings. It was only later that pies began to have sweet fillings, and have since become more and more popular over the years. A cookbook from 1796 listed only three types of sweet pies, while one written in the late 1880s featured eight sweet pie varieties. By 1947 the Modern Encyclopaedia of Cooking listed 65! Nowadays there are hundreds of sweet pies. 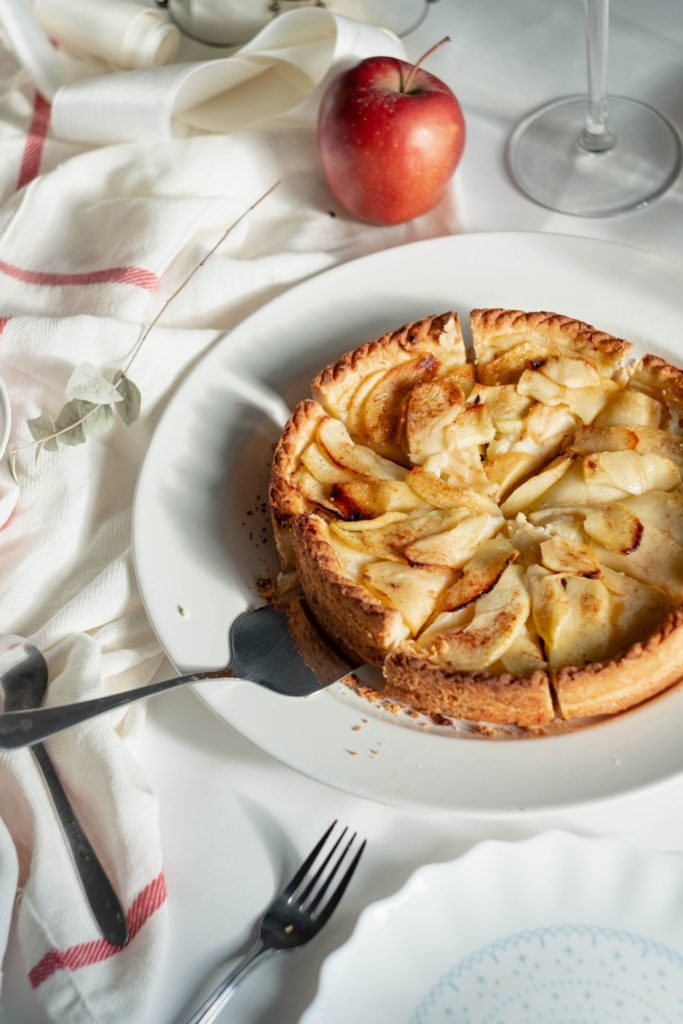 To prepare pie crust: Roll out half the pie pastry on a lightly-floured work surface. To prevent the pastry from sticking and to ensure uniform thickness, roll from the centre of the pastry outwards and keep lifting up and turning the pastry a quarter turn as you roll. Check for the correct size by inverting the pie dish over the pastry. The pastry should be about 3cm to 5cm larger than the dish.

Being careful not to stretch it, place the pastry into the pie dish and trim overhanging pastry to within 20mm of the edge. Refrigerate while you make the pie filling.

Roll out the second half of the pastry to a similar size as before and transfer it to a large parchment-lined baking sheet. Keep this in the fridge until needed.

To make apple filling: Peel, then cut apples in half. Remove cores and slice apple halves into thin 6mm slices. Place apple slices into a large bowl. Scatter both sugars, salt and spices over the apples and toss them with your hands, coating the apple slices as much as possible. Set aside for 1 hour at room temperature.

Toss corn-starch with the apples. Transfer the apples into the prepared bottom crust using your hands to really pack them down into the pie. Fill the pie until apples are at the same height as the edge of the pie crust. Pour the juices that have accumulated at the bottom of the bowl over the apples. About ½ – ¾ cup will suffice. Cut a tablespoon of butter into eight or so small pieces and dot them over the pie.

For a double crust pie, place the second pie pastry round over the filling or cut it into strips and lattice the top. If you are not adding a lattice crust but adding the top crust in one piece, use a sharp knife to cut a few slits in the top of the crust to allow steam to vent.

Trim excess pastry from the top crust or lattice strips and fold the overhang underneath itself, forming a thick rim. Press it together, crimp it with your fingers or use a fork.

Whisk the egg with a tablespoon of water and use as an egg wash by lightly brushing the top crust. This adds shine and helps the crust brown.

Place the prepared pie onto a baking sheet lined with parchment paper and bake for about 75 minutes, rotating a few times for even browning.

The apple pie is done when the juices are bubbling through the vents of the top crust or lattice. Piercing the pie is also a nice indication of how soft the apples are. If they feel too crunchy, the pie needs more time.

Be sure to cool the pie – without slicing into it – for at least one hour, preferably longer. Keep in mind that the pie filling does not fully thicken until it is completely cooled. So, for the absolute best results, cool the pie to room temperature, and then place it into the refrigerator for an hour or two.

Chef’s notes: If you notice that the pie crust is browning too quickly, mould a large piece of foil over a bowl that’s been placed upside down to make a foil dome. Place the foil dome over the pie for the remaining bake time. This will slow the browning.

Salt and pepper to taste

To make the crust, bring the water to a boil, add salt. Stir in the maize meal and cook over low heat, stirring constantly for about five minutes or until thick.

Remove from the heat and mix in the butter, parsley, cheese and egg yolks.

Spoon mixture into the pie dish, lining the base and the sides neatly. Bake for about 30 minutes or until crisp and golden.

Remove from oven and lower the temperature to 180˚C.

To make the filling, mix the onion, pilchards, herbs, salt and pepper in a bowl.

Spread the mixture onto the warm pie crust and top with tomato slices. Sprinkle with cheese.

Whisk eggs and milk together and pour over the tomatoes.

Serve with a green salad. 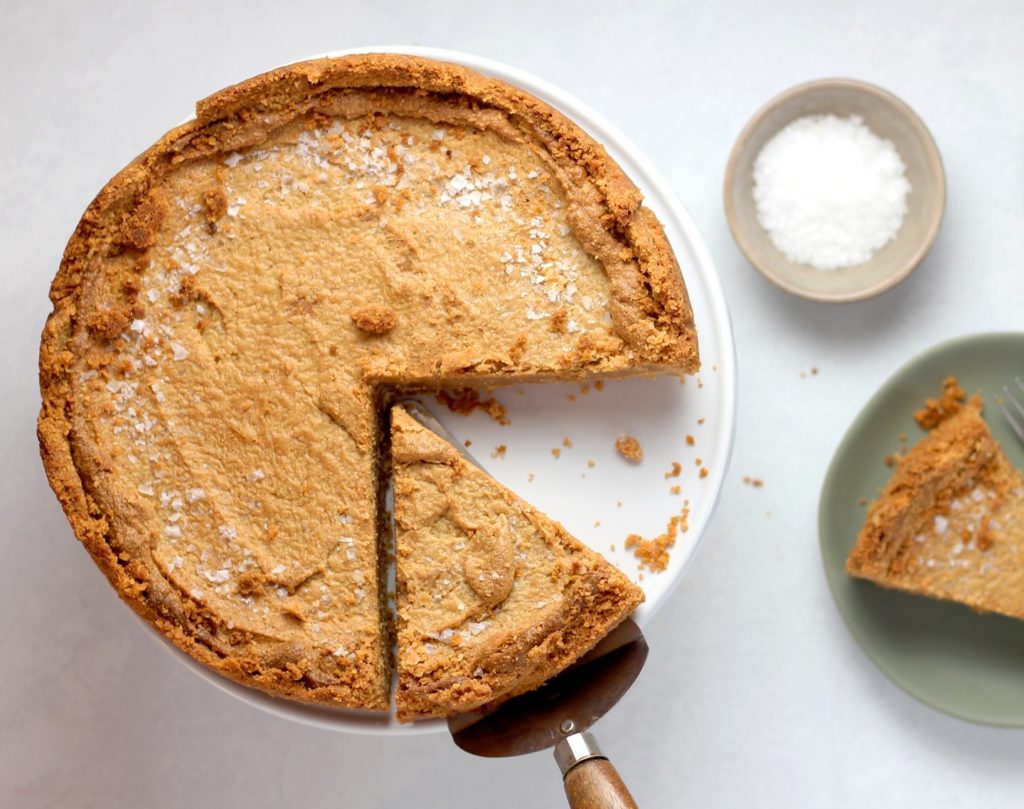 350g savoury crackers (such as Salticrax)

To make the pie crust: add the crackers to a big bowl and crush with your hands. They should be finely crushed, but not like flour. Add the brown sugar and salt and stir to combine. Add the butter and knead until the mixture is well combined.

Place the mixture into a 23cm pie pan and use your hands to pat into a compact crust.

Place in the freezer until it’s frozen and firm (at least 20 minutes).

While the crust is freezing, heat the oven to 180°C and make the peanut butter filling.

Combine the brown sugar and egg in a large bowl and whisk until smooth. Stir in the peanut butter with a rubber spatula until totally smooth.

Add the filling to the frozen crust. Use an offset spatula to spread it evenly, so it totally fills the pie. Sprinkle generously with flaky salt.

Bake for 35 to 40 minutes, rotating halfway through, until the crust is golden brown, and the peanut butter filling is starting to brown.

Let the pie cool at room temperature for eight to 12 hours before serving. (You can cover it with foil after a few hours, or whenever it’s cool to the touch.)

Chef’s note: If you make the crust in advance, wait until it’s firm, wrap it well with foil and refrigerate for up to two weeks.