There’s a distillery in every American state but Kentucky and Tennessee are the two most commonly associated with whiskey and its production.

A dozen whiskies, all American – but not all bourbons … And the results were surprising for some.

“You can put me on record as stating that I am now a convert to American whiskey,” said Magic 828 radio jock and whisky enthusiast Guy McDonald. And the reason for his positive comment was that he’d arrived stating that he doesn’t like bourbon and even wondered why he’d been invited to taste.

“That’s your first mistake!” Hector McBeth admonished his co-host of the 2 Macs and a Dram podcast. “Not all American whiskey is bourbon – there are some wonderfully complex and genuinely exciting whiskeys being made in the States.”

Because he was unwilling to test the category beyond a few big commercial examples, McDonald automatically assumed that all would be sweetly caramel-toned and vanilla flavoured. Surprising to him was the diversity of styles between the whiskeys tasted – and the flavours he experienced.

Possibly the most exciting thing about this tasting is that it demonstrated how this segment of the whisky market is being shaken up. American distillers and established brands are starting to do different things. Jack Daniel’s, for example, had three different expressions in the tasting – a retail special only available at TOPS at SPAR. One was flavourful and balanced, the second sweet forward and the third full bodied and robust.

Similarly, Maker’s Mark have deviated from their standard bottling by releasing the 46, a whiskey which has a slightly different wood regime with white oak staves being introduced to the maturation of the spirit for the first time since 1953.

Ultimately the takeout is that there is more to American whiskey than vanilla and caramel – and any spirit enthusiasts who are open to trying something different or seeing how this particular segment is changing, should experiment a little. 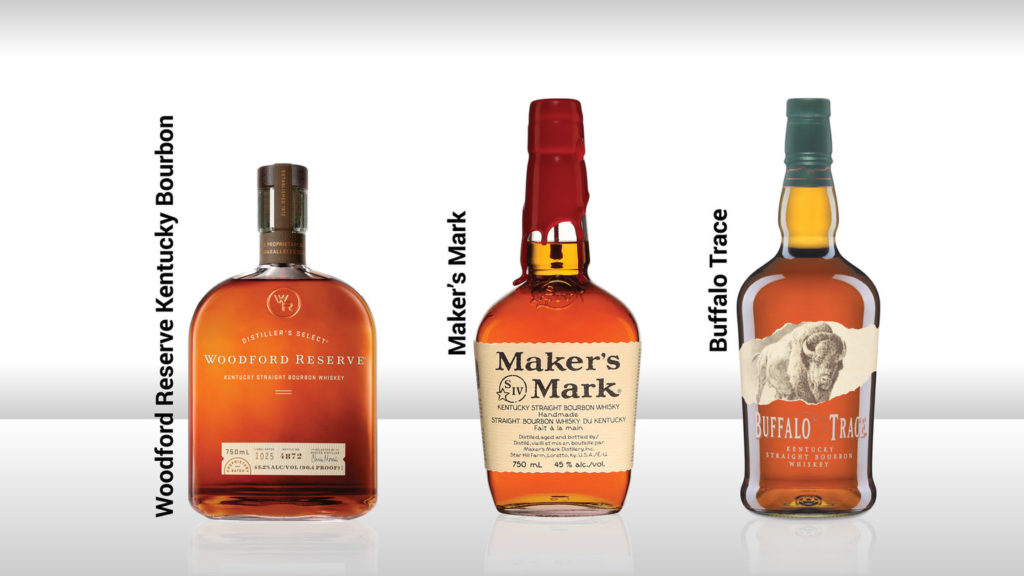 Caramel toffee and raisins said SD while PL found tobacco and sweet spice. Maple syrup and roasted nuts was what FM noted. Rich with citrus notes on the palate – which is why, HM said, it works so well in an Old Fashioned cocktail.

Marzipan and almond with some underlying herbal botanicals – FM. Good intensity of butterscotch said GM. Interesting earthy, cereal note and even a touch of ozone – HM. Palate is rich and bright with light peppery spice – SD.

Intriguingly floral said CR while PL found it grassy. Pleasant leather and tobacco aromas and flavours – GM. FM noted it was something of a peacock: starting out quite modestly and then growing in intensity and flavour with a big fantail. Big citrus hit said HD. Another good Old Fashioned candidate. 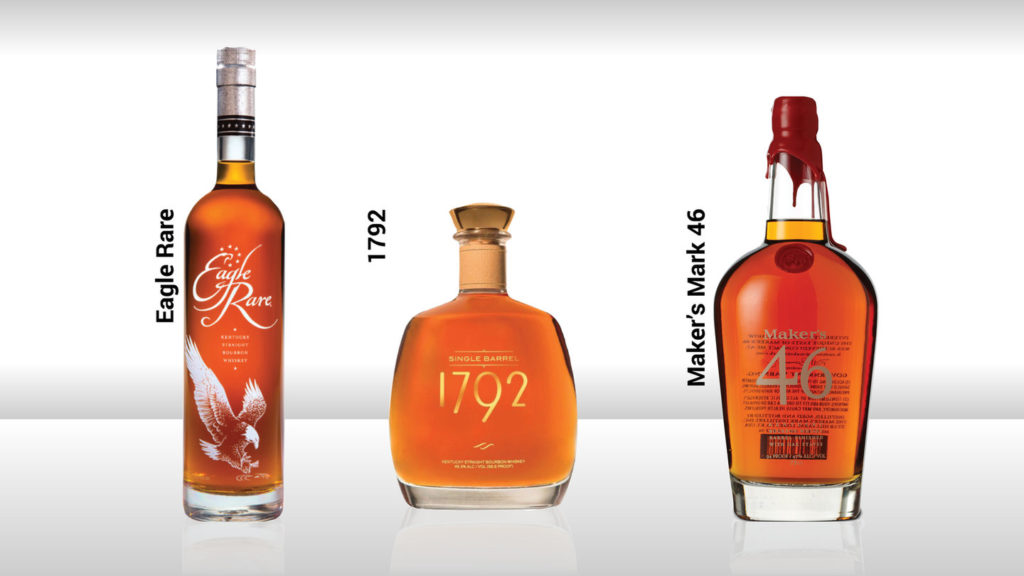 “I’d have this neat with a cigar!” – HD who found it sweetly aromatic with marzipan, hint of tobacco too. Caramel custard said FM while CR noted its white chocolate smoothness and appeal. SD praised its length of flavour.

A distinct note of the burnt sugar, said SD, like the topping of a crème brûlée. Layered, complex and appealing – GM. Gentle green, almost botanical notes, said HD, liking its earthy kick. Both PL and FM noted the roasted banana on this one.

Rich vanilla and butter toffee – HM. Vanilla, polished oak with a savoury nuance of toasted crumbs and bacon kips – FM. Textured, smooth and nutty flavour with a lingering complexity on the aftertaste. PL said the additional oak stave treatment was actually mentioned on the label so it’s certainly not hidden. 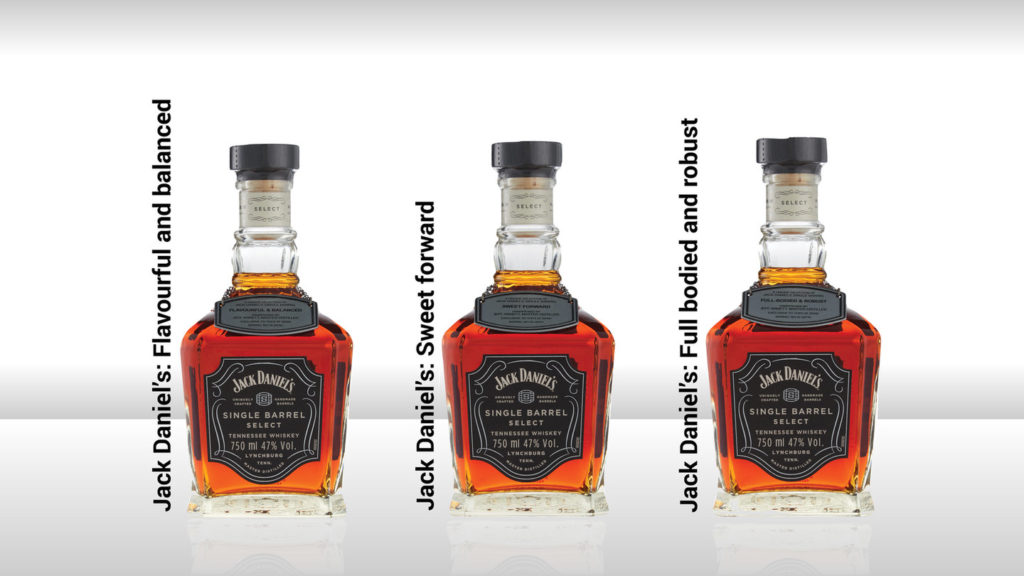 Spicy fruit and tobacco with a hint of both citrus and dried apricot said SD. Nuttikrust and digestive biscuits – HM while PL found a gentle nuance of cloudy apple juice which spoke of its fruitiness. GM found it more dry than some of the other samples.

Brown butter – creamy and rich, with varnished oak too said FM and HM. Some cherry tobacco, camphor and certainly robust in terms of its body and structure, it announces itself the minute it hits the taste buds. GM said the banana leaf was – for him – “quintessential Jack Daniel’s”. 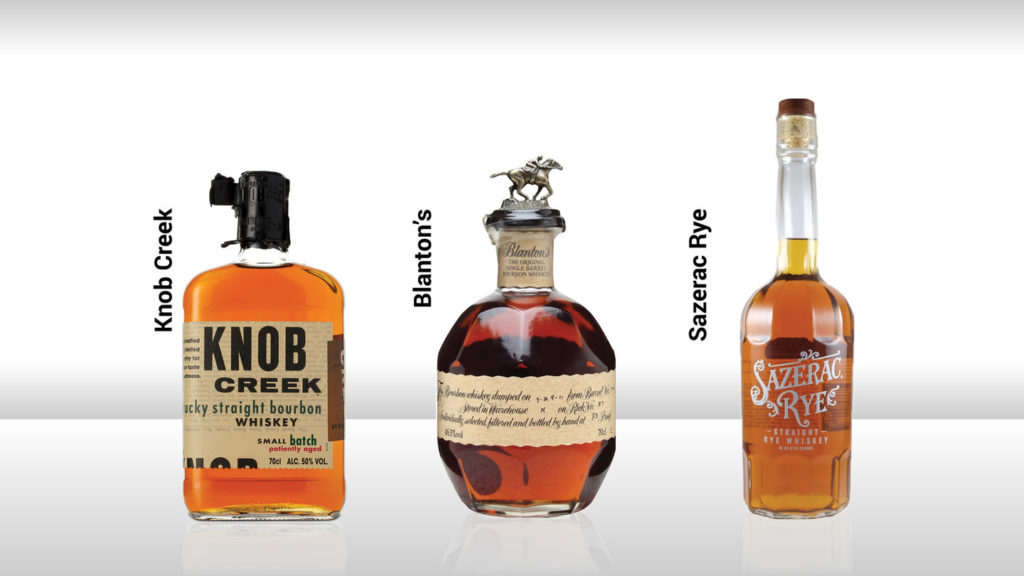 Almond skin said both CR and HM. “Almost like a Reposado tequila,” said HM, echoing FM’s comment about it being somewhat vegetal. She also found a touch of roasted pineapple. Beautiful balance and length with a rich, almost dark chocolate, note said SD. Weetbix and toasted cereal – GM. The oak is big but the spirit is not overpowered by it was PL’s comment.

“The focus and precision on this is insane,” said HM. Crystal clear with vanilla, cranberry and apricot richness but smooth and balanced. SD seconded that finding the harmony on the palate really special. “Light peppery note too. This would do well in a single malt tasting!”

Being the only rye whiskey in the line-up this was noticeably different. Schooldays came flooding back for GM. “Straight back to the classroom – with the oak of the desk, a freshly mown lawn or sports field outside, a hint of leather school satchel … Love it!” SD and HM noted light sweet notes with even a touch of passion fruit while FM picked up some violets and a maple syrup element.