Brewskis, suds, frosties or ales. Call them what you will, American beers have come a long way and have retained a distinct identity writes Lucy Corne.

It all began with a booze ban. When the United States congress implemented a complete veto on the production, sale or consumption of alcohol in 1920, it had consequences that lingered far beyond the 13 years of the “social experiment”. In fact, it would take the American beer industry six decades to recover, at least in terms of brewery numbers.

In a flurry of optimism once Prohibition was lifted in the 1930s, hundreds of new breweries opened or restarted, but decades of consolidation, mergers and buyouts saw that number plummet. By the 1970s there were fewer than 100 breweries across the country, with half a dozen companies controlling some 75% of the market. And almost all of the beer they brewed was the same style – golden lager.

America had long been a lager-drinking country. The earliest beers in what would become the United States were ales imported from Britain, but beer didn’t really flourish until the 19th century. It was the German immigrants of the 1840s that would change the beer landscape. They brought brewing knowledge from their homeland and blended it with local ingredients to produce lagers that featured corn or rice alongside locally grown barley. 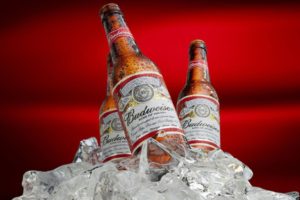 Some of these pre-Prohibition breweries survived the lean years and went on to become household names the world over. Miller, Coors, Pabst and Anheuser-Busch – the brewery behind Budweiser – were all founded by German immigrants in the 19th century. They managed to survive 13 years without selling a single beer by – to use the parlance of our times – pivoting and selling beer ingredients, non-alcoholic versions and even ice cream.

Anheuser-Busch is now the world’s largest brewing company and currently operates in almost every country on the planet. While the company today counts a wealth of international brands in its stable, the most famous of them all is Budweiser, an adjunct lager that has conquered the world through its exceptional advertising campaigns. Over the years more than a dozen variations have come and gone including Bud Light, Bud Light Lime, Bud Light Lime-A-Ritas and Budweiser-Chelada, a blend of lager and Clamato (tomato juice, spices and, would you believe, clam juice).

Miller and Coors have also grown and following a number of buyouts and mergers, they eventually joined forces to become MillerCoors. Their two biggest sellers are Coors Light and Miller Lite, both offering a lower calorie drinking experience. Released in 1973, Miller Lite was the first breakout light beer in the US, launching what would become the country’s favourite beer style. 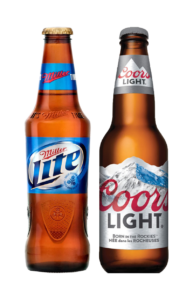 Pabst too dates back to the mid-1800s, although for a while it looked like the brewery wouldn’t see out the end of the 20th century. By the 1980s it seemed the namesake Pabst Blue Ribbon lager had reached the peak of its popularity and was destined to disappear into the annals of beer history. It managed to cling on and then got a 21st-century boost from a somewhat unlikely source. In the early 2000s PBR, as the beer is lovingly known, was embraced by hipsters drawn to its retro-chic image and anti-mainstream marketing. Today the beer – another uncomplicated lager – is a well-loved piece of American culture.

The American beer scene was a fairly boring place to be in the first few decades after Prohibition. Ales had been all-but-eradicated and the only real choice drinkers had was which brewery’s pale adjunct lager to purchase. Then in 1978, something happened that would serve as a catalyst to once again transform the American beer industry. President Jimmy Carter revoked a 58-year old piece of legislation – the last hangover of Prohibition. Since 1920, homebrewing had been illegal across the USA and while plenty of enthusiasts were undoubtedly brewing illicit batches of ale in their kitchens and garages, it wasn’t until the early 80s that homebrewing began to take off.

As has happened more recently here in South Africa, some of those homebrewers began to wonder whether they could turn their passion for beer into a profession. And so a legion of microbrewers was born. Brewery numbers began to slowly rise and by 1990 there were almost 300 breweries across the 50 States. Since then, the US beer scene has experienced growth like nowhere else and by 2019 the Brewers Association counted a whopping 8 386 breweries nationwide. Today the US has the most vibrant and varied beer culture on the planet.

While the biggest selling beer style is still the pale lager, the darling of the craft beer scene is definitely IPA. Based loosely on the 19th century ales brewed in Britain, the American version of the beer benefits from slightly higher alcohol and a hearty dose of American hops. In fact it is the hop that has helped catapult American beers into something that brewers around the world want to try and emulate. 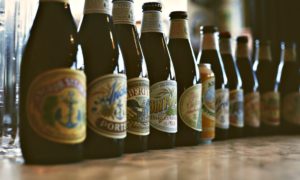 American hops today stem both from hop strains imported from Europe and from wild hops native to the US. In the early 70s, a government-funded breeding programme created Cascade, an aroma hop with notes of grapefruit. It would prove a game changer. The first brewery to put it on the map was California-based Anchor Brewing Company, who used it in their Liberty Ale in 1975. Liberty is often referred to as the first modern American beer – the beer that launched the craft revolution. Its citrus-forward aroma was well received and soon other breweries began to utilise Cascade and similar hops in a beer style that would become known as American Pale Ale, or APA.

Over the years, these beers became more extreme – hoppier, more bitter, higher in alcohol and with increasingly powerful aromas of citrus, pine and tropical fruit. The American IPA had arrived and it would go on to dominate craft beer in America and beyond. IPA accounts for around 25% of craft beer sales in the US and is the most entered beer style in the two biggest beer contests – the World Beer Cup and Great American Beer Festival.

Although in the past a few American craft imports have found their way into South Africa, these days if you want to sample an American style pale ale, you’ll have to settle for a locally made version. Luckily these abound – check out pale ales from Jack Black, Agar’s and Mad Giant or IPAs from Devil’s Peak, Aegir Project, Paternoster Brewery and Afro Caribbean Brewing.

The US beer scene today is almost as divided as its politics. The vast majority of American beer drinkers like their beer light. Light in alcohol, light in flavour and increasingly light in carbs and calories, with the country’s three best selling beers falling into the light/lite category. But at the other end of the scale are the craft drinkers: flavour-seekers, always pushing the boundaries of their palates with beers that can be hoppy, dark, rich, sour, fruity and much, much more. 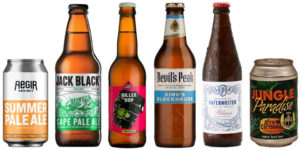