DECADES BEFORE CRAFT BEER BECAME A TREND, THE GENTLY ROLLING GRASSY HILLS OF THE KWAZULU-NATAL MIDLANDS WERE HOME TO SOME NOTABLE SMALL- SCALE OPERATIONS – AS LUCY CORNE FOUND OUT. 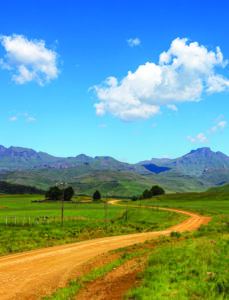 I didn’t originally set out to become a beer writer. I was actually researching a travel guide to South Africa when I stumbled across the country’s only designated beer route. It was 2006 and I knew little about beer other than that I enjoyed it. The route led me through KwaZulu-Natal, dropping in at half a dozen breweries large and small. It also provided the very first in what would years later become a long string of articles on South African beer.

Almost all of those breweries have since closed, but in the past couple of years, many more have opened in their stead. Today there are 20 breweries around the province, some offering tours and tastings, others focusing on bottling and distribution. Taprooms are found from Pennington on the south coast to Eshowe in Zululand and deep into the Drakensberg, but it’s impossible to visit them all in a weekend. Luckily, there’s a defined ale trail kicking off in Durban that you can easily follow over the course of a couple of days. 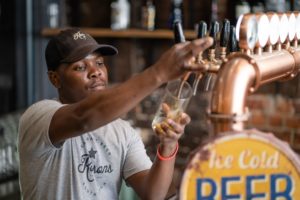 One of the province’s longest running breweries is Robson’s, which moved from rural Shongweni to downtown Durban in 2016. The family-run brewpub is a two-minute walk from uShaka Marine World and the southern end of Durban’s Golden Mile. It’s a convivial spot – the kind of place where you pop in for a quick burger and a pint of the flagship Durban Pale Ale and
suddenly realise the sun is setting and you’ve worked your way through most of the range. Finish off then with a glass of Hammer of Thor, a well-hopped 8.3% ale that pairs perfectly with hard cheeses as an after dinner treat.

From here you’ll need a car – and of course a designated driver! – to head up into the hills for the rest of the route. It’s only a 30-minute drive to Stumpnose Brewery in Kloof, one of the newest in the province. After months of licencing troubles, recipe development, taproom
research and renovations, the brewery opened in early 2020, only to spend most of the year shuttered by the lockdown. But at last the doors of the taproom, found in a century-old building in the heart of Kloof, are open and locals are quickly embracing the brews. You’ll find up to 10 different beers on tap at any one time, including a hazy pale ale, Mrs O’Nions American Brown Ale and for those seeking something a little more adventurous, the Albatross Gose, a historical German style that’s sour and ever so slightly salty. 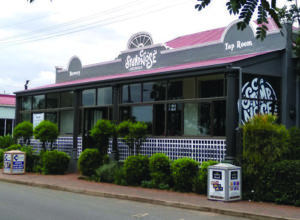 With your sober driver well fed and watered, jump back into the car for a mere 20 minutes and you’ll reach the evocatively named Valley of a 1000 Hills. The chef’s school here has been around since 2004, with a brewery opening on-site six years later. Now under new management, the beer range has happily been streamlined to feature a quartet of ales and a pilsner. But it’s not just the 1000 Hills beers you can sample here. In June of this year, in between alcohol bans, two
Pietermaritzburg breweries gathered their kegs and recipes and joined forces to open a collaborative taproom at 1000 Hills. Clockwork Brewhouse is best known for clean, classic styles
such as a malty English bitter and their award-winning Schwarzbier, while Doctrine Brewing is known for pushing boundaries with their high ABV brews and barrel-aged experiments.

Brewing is a part of the curriculum at the chef school, and the students also preside over the deli and Classroom Café, where you can grab a pizza, salad or burger and even some “bar(k) snacks” for your pooch. Kid friendly to boot, you’re likely to spend the whole afternoon here and after
working your way through tasters of three different brewers’ beers, you’d do well to stay the night hereabouts before tackling the second half of the brew route.

The Midlands Meander is well known for quaint guesthouses and once-off craft workshops, but there are also a few breweries hidden along the route. You’ll have to veer off the main Midlands road to get to Lions River Craft Brewery. Found 6 km down an undulating gravel road, it’s not a
brewery that is on everyone’s radar, but it’s definitely worth the detour. Lions River takes a lot of influence from German beer culture, with a Bavarianinspired beer garden and beers to match. The brewery is only open on weekends, so be sure to plan your trip to tie in with a Saturday or Sunday lunchtime for a meat and cheese platter and a pint of the rich yet still thirst-quenching Vienna Lager. 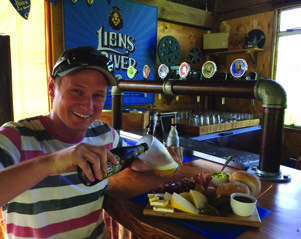 The R103 continues to wind its way northeast towards Nottingham Road. Happy Days Brewery opened here in 2018 on the Kleinloog family farm. For two decades the farm – Netherwood – has focused on rearing Angus cattle and when the brewery was added, it was designed to work in harmony with the animals. The malted barley leftover from the brewing process makes fine feed for cattle and after each brew day the grain is shovelled into troughs alongside the taproom. And as the cows enjoy their barley treat, so can patrons do the same, grabbing a pint to sip as the animals chomp.

The beer range is varied and it would be a picky drinker that couldn’t find something to sip on. At the lighter end of the scale there’s a lager and a fragrant Belgian-style witbier, flavoured
with orange peel and coriander seed, while those looking for a more robust pint can try a battle of the beers with the magnificently named Oh No He Didn’t Dark Stout and Oh Yes He Did Red Irish Stout. The taproom and beer garden are extremely welcoming places to sip and eventually you’ll perhaps work your way through the whole beer line-up. If you’re travelling with kids, they too will happily while away the afternoon playing on the BEER TO GO If you want to sample the best of KZN’s craft beer but don’t have time for a multi-stop brewery tour, there’s still a way you can taste what the province has to offer. Hillcrest TOPS at SPAR is considered to be one of the best craft beer stores in the country. As well as ales and lagers from across South Africa you’ll find a vast selection of beers from virtually every brewery in KZN, meaning you can buy your
favourites and do a province-wide ale trail from the comfort of your own home. jungle gym and locking eyes with inquisitive alpacas that wander close to the beer garden. There’s even accommodation if you enjoy the Happy Days’ cheery vibe. 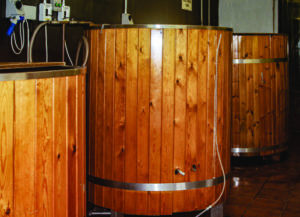 There is just one more stop on our route and it is a must. It’s the longest running brewery in the province and one of the oldest in the country. Nottingham Road Brewing Company was founded in 1996, more than a decade before the term “craft beer” was ever used in South Africa. Its English-style ales are the perfect match for the Midlands’ misty weather and the brewery’s inviting cosy pub, a place where you actually pray for rain to give you the excuse to stay all day. Notties was the star of that very first beer article that I wrote 14 years ago and as I snuggle up to a pint of Pickled Pig Porter, I feel pretty sure it’ll be around for many more decades – and articles – to come.