“JUST AT THE CLOSE OF DAY THE GENTLE GALES RETIRED, AND LEFT THE PLACE TO THE DISPOSAL OF A PROFOUND CALM. NOT A BREEZE SHOOK THE MOST TREMULOUS LEAF.” BRAD CARTWRIGHT MUSES – SOMEWHAT LESS LYRICALLY – ABOUT SUNDOWNERS. 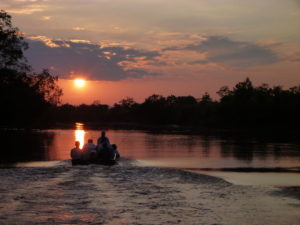 Author John Filson wrote those words in his book: The Adventures of Colonel Daniel Boone. The relevant paragraph continues: “On the other hand, I surveyed the famous river Ohio that rolled in silent dignity, marking the western boundary of Kentucke with inconceivable grandeur. At a vast distance I beheld the mountains lift their venerable brows, and penetrate the clouds.”

Fishermen the world over get to observe the sort of majestic things that Colonel Boone did: mighty mountains, slowly meandering rivers and nature in all its glory – at either the opening or closing of the day.

It’s usually at the latter when these fisher folk gather for fellowship with part of the ritual being lubricated by liquor.

So why does a cold beer or iced gin and tonic taste that little bit better – just a touch more special – after a long day out on the river or ocean? It’s a question I’ve been trying my best to answer for over 40 years.

One doesn’t need to fish to enjoy a chilled ale – but it certainly seems to help. Or so I believe. 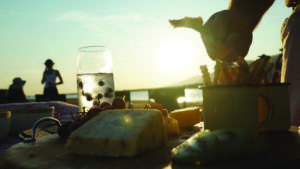 Seldom do you find a couple of fishing buddies sitting around a cold box sipping sparkling water. That’s not to say that it doesn’t happen … merely that I have no personal experience of such an event.

Perhaps it’s just easier for normally honest people to exaggerate after a couple of dops. In my understanding that would make sense, given the number of patently obvious fibs and exaggerations to be found expounded around the campfire, and the remarkable ability a released fish has to grow in size and fighting prowess as the evening progresses.

Good fishing destination managers are well aware of the prerequisite of having well stocked pubs and coolers, along with a supply of ice of which polar regions would be proud. And that’s a
particularly impressive feat in many of the hot remote areas around Africa, but without which, even a good day’s fishing might be irrevocably ruined.

Under normal circumstances, our team or crew will be on location half of any given year filming our angling TV shows, so we’ve been lucky enough to enjoy some of the most splendid sundowner locations on the planet. Anyone who has ever spent an evening on a sandbank in the Zambezi River, or a houseboat at Lake Kariba, watching the setting sun slip slowly below the horizon in a blaze of orange, will know precisely what I mean.

Then, there’s the majesty of a live-aboard yacht on the open ocean, or a sandy white beach on a private Island, the Kalahari, or the Okavango Delta. These are all spectacular experiences in their own right, but somehow they just wouldn’t be quite the same without an evening tipple. 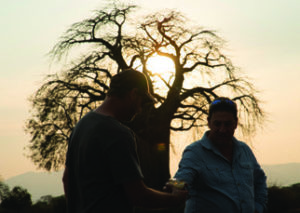 Even a jaunt to our local KwaZulu-Natal midlands trout waters often requires some lubrication for it to be considered a true success. A happy ending around here probably means dropping into Notties Hotel for a cold one on the way home. Talking about this landmark watering hole, the TOPS at SPAR Corporate Challenge fishing event, held here annually, is certainly an indication of how the lines between actual fishing and sitting around the pub discussing it blur somewhat. These two pastimes then are certainly not mutually exclusive by any stretch of the
imagination.

Without the traditional glass of brandy and cola making an appearance on the banks of our many fine dams and rivers, carp fishing would probably slip into obscurity entirely. Bass angling is a serious business for those who practice it. The boats used have large engines and move at high speed from one place to another, so cooler box lids need to be secured at all times in order to avoid nasty accidents or loss of precious liquid. Many ski-boat clubs along the length of our coastline have great settings overlooking the ocean and vibrant pubs where members congregate over a golden brew of an evening. Recreational fishing then seems to be inextricably linked to enjoying a few drinks – always responsibly – with like-minded friends and family.

None of which helps me understand exactly why that beer tastes so good after a day’s fishing. But what the heck, I’m just going to keep collating the research and data until I find a definitive
answer.