LEARN FROM THE ITALIANS AND TAKE YOUR COCKTAIL GAME TO THE NEXT LEVEL, WRITES CLIFFORD ROBERTS.

We dropped to Level 1 as aperitif season begins. Coincidence? Can’t be. Two names that’ll hit the strip in Camps Bay, Melville or Durban’s Florida road are George and Amal. Maybe. But we’re talking about Campari and Aperol here, so it might be an idea to keep this as a handy guide to conversation fillers we’ve compiled about the superstar duo.

START WITH THE COCKTAILS

Campari and Aperol are consumed mostly as aperitifs and in cocktails. You might try ordering one in the original Latin – apertitiuvum meaning “opener”, from whence the modern word hails, but good luck. Still, they’re regarded as appetite stimulators so they’re pre-dinner tipples.

Aperol is the quintessential ingredient for the Venetian Spritz, or Spritz Veneziano if you prefer.
The main component is Prosecco, that bubbly Italian sparkling wine, closely followed by the orange wonder fluid and a splash of soda – over rocks of ice. As its time on the world stage goes, the drink is relatively young, but its history is less so. Adding water to drinks in this part of Europe is believed to have arisen while Northern Italy was under the German Habsburg monarchy. Newcomers unaccustomed to Venetian alcohol would request a spritzen to lighten things up.

Co-authors Talia Baiocchi and Leslie Pariseau give an alternative take in Spritz: Italy’s most iconic Aperitivo Cocktail and allude to the Italian word sprezzatura. It doesn’t have an English translation but is used colloquially. “It’s often tossed around in menswear publications in reference to details of rakish sophistication ,” they say.

“Although spritz and sprezzatura are not officially related, it’s this ‘I-woke-up-like-this’ mix of beauty and ease that perhaps best describes the drink.” 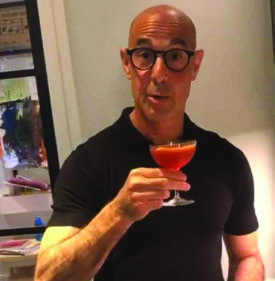 Now, the older Campari has a bigger playbook of history and cocktail expression. Of course, there’s the Negroni (equal parts Campari, vermouth and gin), which if it wasn’t famous enough ramped up in April this year thanks to Stanley Tucci mixing one for his spouse over Instagram. There’s also the Boulevardier (Campari, vermouth and rye whisky), and the Americano (Campari, vermouth and soda), which was apparently the very first cocktail mentioned in James Bond novels.

GET THE HISTORY RIGHT

Campari was created in 1860 by Gaspare Campari in Novara, Italy, and initially named Bitter all’Uso d’Holanda. (Imagine ordering that in a noisy bar.) To punt his drink, Gaspare opened a Caffé a few years later. It became so popular that soon a production plant was required, and this came in 1904, located in Sesto San Giovanni near Milan. But Campari took its first real leap when Gaspare’s son, Davide, arrived to head up Campari’s export division. He also opened Milan’s famous Camparino bar.

Class had long been run of the mill here at the world’s fashion capital. As such, the Camparino was (and still is) a marvel of the Art Nouveau style. There was even a system pumping soda from the cellar; it was the place to be, from inception. But art has always been part of the brand’s identity and many works are now collectors’ items.

The bar is located a few metres from the entrance to the grand Duomo cathedral, which on Easter Sunday in pandemic lockdown hosted Andrea Bocelli via a YouTube live broadcast, the largest classical concert in the world – and zero audience!

Nowadays, Aperol can also be enjoyed here (at the bar, not the cathedral), since the brand was acquired by Campari in the early 2000s. It was born in 1919 and was the work of the Barbieri brothers Luigi and Silvio. They first presented their new drink at a fair not in Venice, which has essentially become Ground Zero for the famous cocktail, but rather in Padua, a town some 40km west of the city. (And if anyone recalls the interminable English literature of schooldays, Padua was the beloved of the bard – with Shakespeare not only making frequent references to Padua but even locating The Taming of the Shrew in this fair city. (Or was it Verona that was the fair city?)

With the winds of Campari at its back, it rapidly grew to become an ambassador of Italian and particularly, Venetian, style.

Like Coca-Cola, the recipes of how one might mix one’s own Campari or Aperollike beverage are a closely guarded secret.

Perhaps even more closely guarded when powerful Italians get involved.

First off, Aperol is lighter in alcohol – just 11%. Both drinks involve infusions of herbs and fruit – ingredients that initially found their way into the drinks for medicinal intentions around the 16th century. For Campari, Wikipedia mentions chinotto and cascarilla; for Aperol, “gentian, rhubarb, and cinchona, among other ingredients” – but who knows, right?

What we do know is that the former’s trademark colour was originally provided by crushed insects. Interesting though is why our penchant for these bitter drinks? Yes, they’re Italian, but … hang on. A research paper encountered while reading the 2019 edition of Human Molecular Genetics cover to cover, weighed up bitter and sweet beverage consumption. They reckon bitter drinks are popular because of their “psychoactive components”. 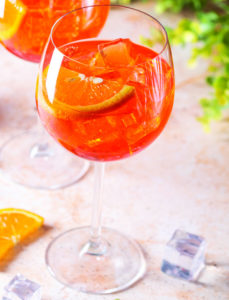 “That is, people like the way coffee and alcohol make them feel,” the people wearing glasses and lab coats stated. No mention of the cool factor. Still, it’s everything you want in the perfect pre-dinner drink: bitterness gets your juices flowing. Or as another paper in the international
journal of complementary and alternative medicine puts it: “… improvements of wellbeing after
ingesting bitters are due to reflex physiological responses elicited by oral receptors”.

MAKE IT ABOUT THE MOVIES

Like Ferrari, Gucci, Versace, Dolce & Gabanna and a myriad others, both brands epitomise Italian style. It’s like that legendary movie that absolutely nails it. (No, not the one with Brando, Pacino and the extended family – but good guess!)

In January this year, the return to cinemas of La Dolce Vita in restored format celebrated the centenary of Frederico Fellini. The filmmaker died in 1993, but this movie, in particular, continues to echo that indefatigable Italian magic.

The story recounts the experiences of the dashing Marcello Rubini, a journalist writing for gossip magazines on a week-long experience of “the sweet life” of Rome. Ah, the halcyon days of travel.

Getting back to Campari, it’s worth taking a look at its Red Diaries. The series of extended advertisementscum- short films is available online and includes the likes of Clive Owen.

Now there’s a name that’ll get any cocktail conversation going.