“IF YOU LIKE PIÑA COLADA, AND GETTING CAUGHT IN THE RAIN …” AND JUST LIKE THAT, AN EARWORM IS PLANTED! FIONA MCDONALD LOOKS AT THE ORIGIN OF THE DRINK – BUT ALSO ABOUT THE MUSICIAN WHO PENNED THE CATCHY TUNE.

If you’re not much into health food, but are into Champagne – then the Piña Colada is probably not your kind of drink since it is sweet, creamy and overtly pineapple flavoured. It’s also the national drink of Puerto Rico, the unincorporated territory of the United States, located 1 600 km southeast of Miami.

With the name meaning “strained pineapple” in Spanish, there are two schools of thought about the drinks origin. Piña Colada is a sweet cocktail made with rum, cream of coconut or coconut milk and pineapple juice, served either blended with ice or shaken. The final touch is a garnish of either a pineapple wedge or a maraschino cherry – or even both.

There’s a legend, Wikipedia informs, that Puerto Rican pirate, Roberto Cofresi used to give his crew a drink of coconut, pineapple juice and white rum to keep up their morale while doing pirately things. There’s no mention of peg legs, parrots or anyone saying “Arrr!”. Cofresi died in 1825 – and the recipe was lost – although historians dispute this version of the story.

In terms of appearing in print, the New York Times reported as far back as 1950 that popular drinks in the West Indies ranged from Martinique’s famous rum punch to Cuba’s piña colada (rum, pineapple juice and coconut milk). And that black-andwhite fact belies the claim of the Caribe Hilton Hotel in San Juan, Puerto Rico, that its bartender Ramon Marrero created the drink in 1954 … Something which is disputed by fellow Puerto Rican restaurant Barrachina that claims
that it’s bartender, Spaniard Dom Ramon Portas Mingot created it in 1963!

Regardless of who or even when, Puerto Rico has happily adopted the drink as its national tipple – something it did officially in 1978. (In fact, the USA loves this creation so much it even set aside 10 July as official Piña Colada Day.) 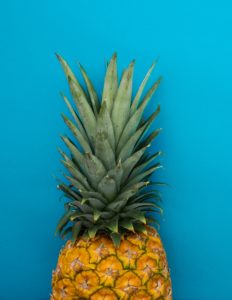 So what about the song – and the man who wrote it? Anyone could be forgiven for thinking that it could occupy space on a list of One Hit Wonders. Far from it. Rupert Holmes achieved fame with the song, officially called Escape, in 1979. But everyone simply knows it as the Piña Colada song. It’s been featured in movies and TV series such as Shrek, Guardians of the Galaxy, The Goldbergs, Third Watch, Splitting Up Together, It’s Always Sunny in Philadelphia and Living
with Yourself.

Interestingly, the lyrics were never supposed to feature the pineapple drink– they were dummy lyrics which Holmes put to music. And the opening line of the chorus originally started with “If you like Humphrey Bogart”, but Holmes changed it at the last minute, replacing it with the name of the first exotic cocktail that came to mind and fit the music. The whole song premise was inspired by a personal ad that Holmes read while idly scanning the newspaper.

As Holmes put it, “I thought ‘I wonder what would happen to me if I answered this ad?’ I’d go and see if it was my own wife who was bored with me”. The title of the song was originally going to be “People Who Need Other People” – and was later revealed to be based on a true story.

Holmes, had big success as a musician, known for his evocative story songs, but as a composer he provided material for Dolly Parton and Barry Manilow, among others. His style even appealed to Barbra Streisand, who used some of his songs in the 1978 movie A Star is Born. How about
this? In the early 70s Rolling Stone magazine likened him to Bob Dylan “in the sense of being an artist of unprecedented originality”.

“The Escape” was the final Number 1 chart topper in 1979. But Holmes wasn’t done. He wrote a
piece in 1986 which was recorded by the Jets who had a Top 3 hit with it: “You Got it All” – that was then later re-recorded by Britney Spears off her 2000 Oops … I did it Again album.

But he was also a playwright, even having his Good Night, Gracie play nominated for a Tony Award in 2003. But he’d already won a Tony Award for both best score and best book for Drood, a Broadway hit in 1985 – and was also involved in writing songs for the Liberace biopic in 2013, Behind the Candelabra.