THE BRIEF WAS AS SIMPLE AS IT EVER IS: FIND THE RECIPE AND A BIT OF A BACK STORY ABOUT THE GINGER SQUARE COCKTAIL. EASIER SAID THAN DONE …

The Ginger Square appears to be a drink that the world and bartenders have almost forgotten.

Which is quite sad because it’s a delicious cocktail, made with brandy, ginger liqueur and either ginger ale or ginger beer, depending on your preference, and then garnished with a slice of
lemon. It appears that it’s one of those cocktails that never really stepped up into the spotlight, despite being delicious and beloved of South Africans in the seventies.

One of the few references to the Ginger Square allude to it being a drink which was served on the RMS Caronia – and that’s where the cocktail research tale took a bit of a tangential turn …
Cunard is one of the world’s great shipping lines, known for their graceful oceangoing vessels the Queen Mary and Queen Elizabeth. But the first vessel which was a true cruise liner was the
RMS Caronia – the one with the Ginger Square on its cocktail list!

Known as the Green Goddess because of her original green paint job, she was the vessel which kick-started the entire cruise industry at a time when shipping served a practical purpose in moving people from one continent to another. Sailing from Southampton to New York or Cape Town or Sydney was mainly about getting from Point A to Point B as fast as possible – until the RMS Caronia came along and changed things. She differed from the other vessels on the Transatlantic run in that she had a swimming pool, for example, along with bathroom or shower
facilities in every cabin – and there were only two classes: First and Cabin. Leisure and relaxation were part of the voyage, not speed to the destination.

Interestingly, RMS Caronia was one of the largest vessels built in Scotland immediately after World War II at 34 000 tons – and Wikipedia reports that was the case until the Queen Elizabeth II was built in 1967. In an interesting parallel she was also launched by Princess Elizabeth – later to become Queen Elizabeth 2 – in October 1947, in one of her final engagements before marrying Prince Phillip!

RMS Caronia boasted nine decks with the promenade deck 665 feet long and was capable of a 22 knot top speed. But she also had more than her share of mishaps … She was a single-funnelled vessel, the largest funnel recorded – but it could cause problems handling the steering in high winds.

The first world cruise was undertaken in 1951, calling at 30 ports during the voyage. While in the Suez Canal she ran aground for an hour near the El Ferdan Bridge. Then there was a fire during
her annual refit at a Liverpool shipyard. Four years later, in June 1956, she again got stuck, this time grounding on a sandbank outside Messina, Italy.

The RMS Caronia decided to amend the route she cruised, crossing the Atlantic from New York to Cape Town before returning via Japan and the Pacific Ocean. Cunard became embroiled in a lengthy legal battle when the Caronia demolished a light tower at the mouth of the Port of Yokohama on her second around-the-world voyage in 1958!

The ship was sold and spent some years languishing in New York harbour before she was sold for scrap – but while being towed to Taiwan to be cut into pieces, she came adrift and washed
ashore in Guam … partially blocking the Apra Harbour! To make matters worse, she settled alongside a Korean landing craft which had sunk in almost the same spot. The landing craft was loaded with munitions which had to be safely removed before any work could be done on the Caronia … 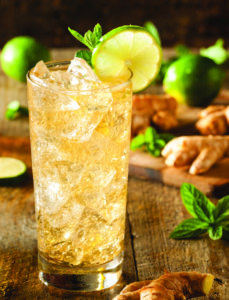 Who knew that tracking down the Ginger Square would uncover an interesting story of the first cruise liner?